Not long ago my husband announced that he would be going to downtown Denver on a Friday morning for a meeting.  He proposed that we meet for lunch and spend the afternoon in Denver.  Having been married for fifteen years, I could read between the lines and see I was being asked out on a date.  Like any cyclist, I managed to work a bike ride into the logistics of this date.   While he was in his meeting, I would pedal my way from the suburbs into the city and meet him just in time for our lunch date.  We could then put the bike in the car and go from there in one vehicle.

I have become quite familiar with the “good” (read: bicycle friendly) roads near my home.  I know just where to go to keep my ride relatively flat, which is not an easy task when you live along the foothills.   I know where to go when I want to climb.   But most importantly, I know which roads to avoid because they’re just too narrow to accommodate cars and bikes safely at the same time.  But pedaling into Denver?  This was new territory for me.

I did some online research using sites like Strava and RidewithGPS to determine the best route from my house.  I committed the route to memory so that I could avoid any unnecessary stops along the way.  After all, I didn’t want to keep my handsome date waiting!  I had no way of knowing that construction would close parts of the bike path I was planning to use; or that detours along the path would have useless or non-existent signage for directing bike traffic.  Once I left the bike path, I had no idea if the roads I would be traveling would have bike lanes or shoulders.  It was an adventure on carbon fiber. 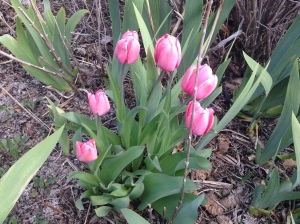 While I did encounter some unexpected construction, I was also pleasantly surprised to see that the irises were taller, more flowers were in bloom, and the grass was greener as the elevation dropped the nearer I got to the city.  The construction and the detours did slow me down, but all I had to do was look up for the skyscrapers to know which general direction I needed to be going.

Sometimes all you need to keep moving forward in life, or to keep from going in circles, is a general sense of direction.  Yes, any ride along a new route is bound to have some unexpected turns and obstacles, just like life does.  So look up for a brief moment, get your bearings, and keep pedaling.  You might look down to see something you hadn’t noticed before!