The Beartooth Pass is on US Highway 212 between Red Lodge, Montana and Cooke City, Montana.  The highway meanders along the borders of Montana and Wyoming high on the plateau of the Beartooth Mountains and eventually leads right into Yellowstone Park.  It’s closed in the winter and occasionally on other days throughout the year, given the right weather conditions.  The day before I pedaled up the pass on July 30, it was closed due to snow.  At its summit, this road is the highest elevation highway in both Montana and Wyoming.

I’ve driven over Beartooth Pass several times on my way to or from Yellowstone Park over the years.  The views never disappoint despite the wind and cool temperatures on top of the plateau.  When I started this cycling journey four years ago, riding up Beartooth Pass on my bike was  always a thought in the back of my mind.  I guess you could say it was on my “ride bucket list”.  Yes, cyclists have such a thing as I suppose motorcyclists do as well.  However, each summer when I returned to Montana, there was always some reason why I couldn’t do the ride: last year, I brought a mountain bike, the year before I was too busy… the list goes on.  This year I was feeling overwhelmed with all that is involved with moving from one home to another and felt a sense of urgency about returning to Colorado.  However, after seeing the weather forecast for the remaining week of my visit, I decided to stay just long enough to fit in the ascent.

I got up early on the morning of July 30, loaded my bike into the car, and departed Billings for Red Lodge.  As I

The sign just outside Red Lodge where I parked nearby and started my ride.

approached the mountains I realized there wasn’t a cloud in the sky.  I unloaded my bike, suited up, and pedaled away.  I had done better research for this ride than my previous ride on Alkali Creek Road and knew that I could expect to pedal for about 25 miles to the summit on a paved road.  I could expect the ride to take me approximately 2.5 hours based on the results of other cyclists I had seen on Strava.  I also knew that the climb to the summit would be gradual, at about 4% on average.

As I pedaled along, traffic was minimal on this beautiful late July day.  I saw many more motorcycles than cars.  The switchbacks started at nearly 7 miles into the ride.  As I approached the scenic overlook turnout, I passed 5 other cyclists, all of whom pulled off into the overlook parking area.  I kept going because I knew it was about halfway to the summit and I don’t like starting and stopping on prolonged climbs; it’s hard to get the legs going again.  Besides, there was no need.  I had plenty of fluids and food tucked in my pockets.

At about 19.5 miles into the ascent, I came to a place where I had to descend and then climb again to reach the summit.  I’m not going to lie, I was cold and considered calling it good and turning around.  But then that little voice in my head chimed in with “I didn’t come this far just to turn back now, especially when I can see the summit in the distance.”  I got as aero as I dared and

descended as quickly as possible, so as to minimize how much colder I would become before the final climb.  My garmin showed about 23 miles at the summit.  I took turns with all the motorcyclists taking pictures in front of the summit sign.  Then I slipped on my wind jacket for the descent.

What I didn’t realize when I had done my ride research was exactly how much climbing the ride would entail.  The total elevation gained was 5,262 feet… just 18 feet shy of a mile, give or take.  Hmmm.  That’s interesting considering the fact that I now reside in the “mile high city”.  A city known for more than just it’s elevation,  if ya know what I’m sayin‘.

On the descent, I stopped and took some pictures along the way…Enjoy! 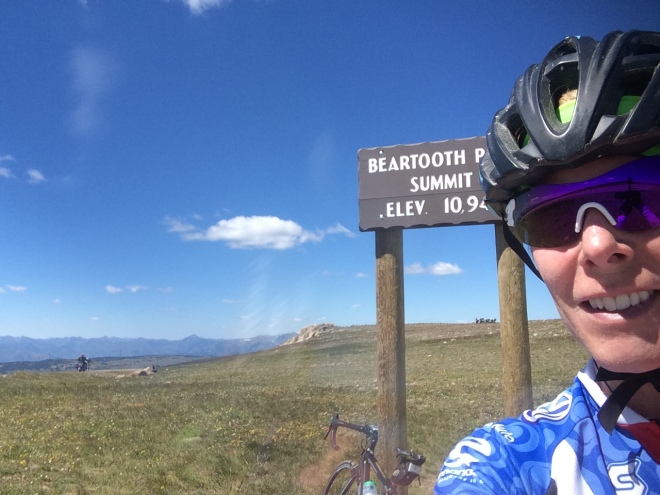 So many motorcycles up there! 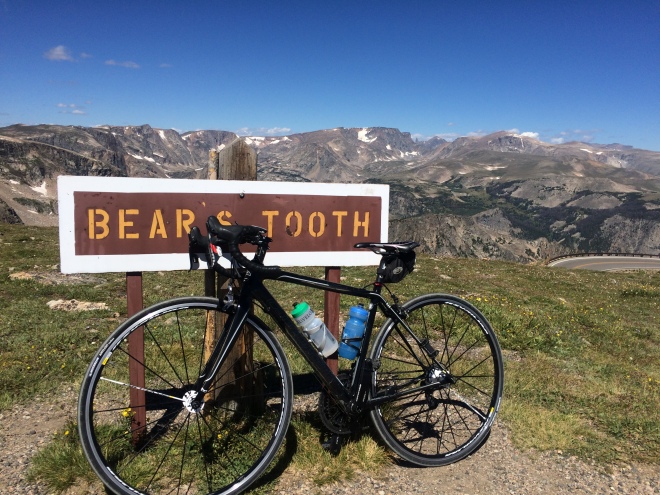 The Beartooth Mountain range. Look closely for the triangle shaped precipice on the horizon over the upper right corner of the sign. That’s the bear’s tooth. The next picture zooms in on it.

A closer/cropped shot of the bear tooth.

While Colorado is my home, I remain a Montana girl at heart.  Every year I make it a priority to visit my family in Montana, where I spent most of my adolescence.  This year I brought my Cannondale Evo along to ride during my visit.  Billings is just large enough that there are parts of the town that I’m not familiar with.  I grew up on the west side and rarely ventured to the other parts of town.  Therefore, I wasn’t exactly sure where each of my rides would take me.  This “from the saddle” discovery is one of the funnest parts of riding and has the potential to turn each ride into a fun adventure ~ or not. 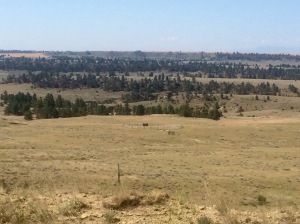 The view from Molt Road. The wild turkeys didn’t make it into this pic.

On my first ride, I decided to take the Molt Road out of Billings.  I was planning to ride out and back and expected at some point I would see a sign indicating how many miles it was to Molt.  Since there was no sign- or because I missed it – I just rode until it was time to head back to Billings for other commitments.  I could see Molt in the distance, but would have to save the complete ride for another day.

On the next ride, I went to the Billings Heights part of town.  I happened upon a bike lane and followed it until it ended.  I ended up riding in a big loop.  I then came upon a pretty nice bike path along Alkali Creek Road and decided to see where it went.  After a few miles, I caught up to three women out for their morning training ride.  I rode with them for a few miles and it turns out one of the gals was on the committee that plans the Billings bike path.  She was a wealth of information on the bike path system and gave me some helpful directions and ideas about where to ride in Billings.

The route for my next ride was inspired as I drove down Highway 3 northwest of Billings.

It had been a long day in the car because we had decided to drive from Banff, Canada back to Billings all in one day.  As we neared Billings, we passed a street sign out in the country that read “Alkali Creek Road”.  I had just ridden on the bike path along Alkali Creek road the other day when I rode through the Heights.  At that time, I had wondered if it connected with another road, and here I had just driven by the intersection of Highway 3 and Alkali Creek Road.  My ride route for the next day was planned!

As I set out on Alkali Creek Road the following morning, I started my ride on the bike path.  Eventually the bike path ended and the houses became fewer and further between along the road.  I wondered how far of a ride it would be until I hooked up with Highway 3 – a detail I had neglected to look up online before departing.  I came upon a man walking toward me and figured he was a local who might be able to tell me how far I had to go to Highway 3.  I slowed, said hi, and then asked him if he knew how many miles it was until Highway 3.  Instead of answering yes or no to my question, he looked at my bike and said “you’ll never make it on that bike with those skinny tires.”

“Really.” I replied.  He went on to say that the road turned to gravel around the bend.  The gravel was so treacherous that he had a difficult time with it on his mountain bike.  I told him thank you and said that I would go see this gravel for myself and pedaled away.  I was annoyed that I hadn’t done proper research before embarking on this ride and was left to ask a stranger a simple question that he refused to answer.  When I saw the gravel, I agreed that it was in fact deep.  Deeper than I would have liked to have ridden under normal riding conditions.  But I’ve ridden on gravel roads before, and if it was only a short distance, it was certainly doable.  But now I wasn’t riding under normal riding conditions; I had been challenged.  And  nothing makes this girl more determined to do something than a boy telling her what she can’t do.

Shortly after embarking on the gravel, I remembered to check the mileage on my Garmin.  After about two miles, I bagan to wonder if I might be better off turning back.  And then I remembered the challenge.  The gravel was unlike any of the gravel roads I had ridden in Colorado.  It was more like I was riding through someone’s deep landscaping rock, rather than down a dirt road with the occasional washboard and rocky sections.    I kept creeping along the road and thought I may have seen cars moving along Highway 3 in the distance.  As I pedaled along, I became more and more annoyed with my failure to research the ride more thoroughly; with the fact that I didn’t notice the road being gravel as I sped by the other night; and with my stubbornness that wouldn’t allow me to turn around.  I considered letting some air out of my tires so that I might have some traction, but I didn’t want to have low pressure for the remainder of the ride after reaching the highway.  Onward I went.

After about 4.5 miles had slowly passed, I finally reached Highway 3.  There wasn’t anyone around to witness my superior dance, so i kept right on pedaling onto Highway 3 and back to Billings.  Will I do better research for my next ride in unfamiliar territory?  Maybe.  Finding your way is a big part of the adventure.  And if it takes a little longer to get there… that’s not necessarily a bad thing when you’re on a bike.

The Beartooth Mountains are just barely visible on the horizon. More on that adventure coming soon!