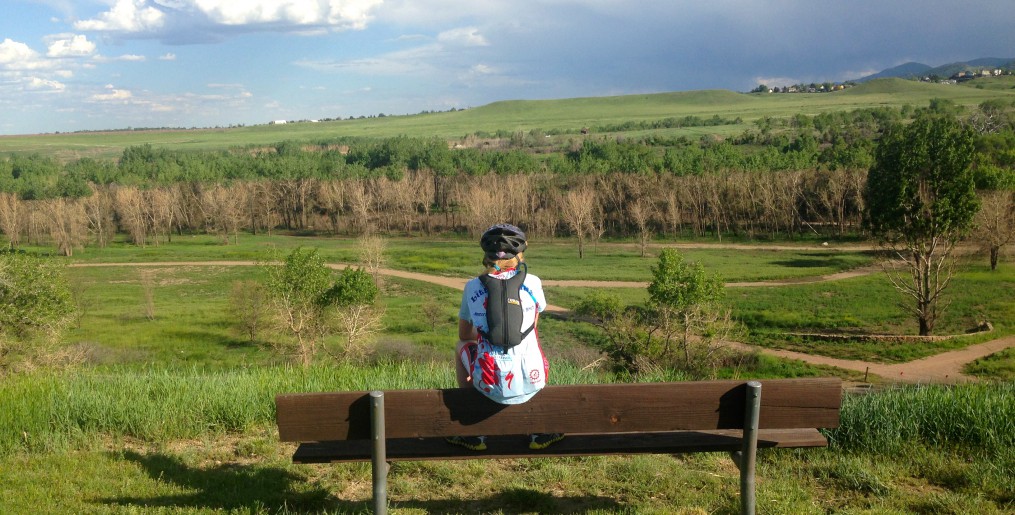 Spring riding can be so elusive with Colorado’s wild spring weather.  The last couple of days had been warm enough to melt some of the 18 inches of snow that had fallen nearly two weeks before; during that time, I’d spent more time on the trainer than I like to.  I had been out each afternoon this week doing intervals at Lookout Mountain in anticipation of the hill climb coming up Saturday.  As I sipped my morning coffee and contemplated riding into work, I heard the birds chirping outside and didn’t see a cloud in the sky once the sun came up.  I decided it would be a good day to ride – perhaps a bit chilly on the way in, but the ride would be worth it, especially on the way home when it was warmer.   I froze just enough to build a little character on the way into the office.

When it came time to ride home, I decided to take a different route just to add on some additional miles and be in the sunshine a little longer.   I needed a joy ride!  As I pedaled along, I saw lots of other cyclists, dog walkers, and runners out enjoying the sun just like I was.  I said hello or waved to everyone I encountered, just like I do on every other ride.  Sometimes I get a return wave, but most of the time I don’t get any response.

As I turned from the Ralston Creek Trail onto Virgil Way, my chain became tangled as I shifted from the big ring to small.  I was unable to take a single pedal stroke as I began to pedal up the hill and quickly came to a stop.  Here’s what I saw upon inspection: 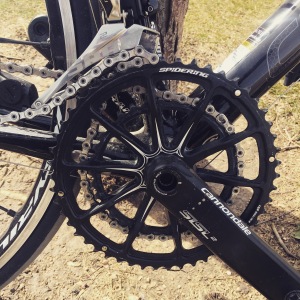 An attempt to downshift resulted in this tangled mess.

Fiddle as I might, I could not get the chain unstuck.  During the few minutes that I was kneeled in the grass alongside the road with my bike upside down, three cyclists pedaled by ~ 2 men, 1 woman.  Not one of them said a single word or paused their pedal stroke as they went by to inquire whether I needed or wanted any assistance.  That annoyed me more than the fact that I might be walking home in my Sidi’s.  So much for my joyride… and just when I had been contemplating which detour to take next.

As I mentioned before, I’m the kind of cyclist who greets and waves to other cyclists that I encounter on my ride.  I make a point of slowing and interacting with cyclists that are stopped along the roadside dealing with an obvious problem, especially if it’s a woman.  Most of the time I simply confirm that they have the tools they need for the job, but on occasion I’ve provided assistance.  At the very least, I can offer moral support or to make a phone call if I’m unable to help.

Clearly the standards I hold for myself are not shared by every cyclist.  As I started the long walk home, another cyclist pedaled by without a word.  Then my phone rang.  I got lucky that my husband (AKA Mr. Fixit) was nearby and able to come and pick me up.  When he arrived, he was able to untangle the chain so I could resume the joyride home.

On my way home, I came upon a little Asian lady who was holding an empty dog leash in the air and looking distraught.  I slowed and circled back to her, remembering ALL the people who had ridden by me without a word.  Through her broken English, I understood that her little yellow dog had gotten away from her and was now missing.  She would sit on the curb and wait while I rode ahead in search of the little guy.  Instead of the dog, I came upon my neighbor who was heading in the opposite direction back toward the Asian lady.  I asked if he had seen the yellow dog in the direction he had come from.  He had not and agreed to tell the Asian woman when he came upon her sitting on the curb.  I turned around and continued my joyride home.

Whether you decide to help another person clearly in need speaks volumes about the character of your person.  More importantly, I’m a firm believer that you get back what you put out there in the universe.  So I’ll continue to smile, wave, and offer help to those in need, even those that choose to ignore me.  It’s just the way I roll, even on this joyride.

2 thoughts on “The Joyride”