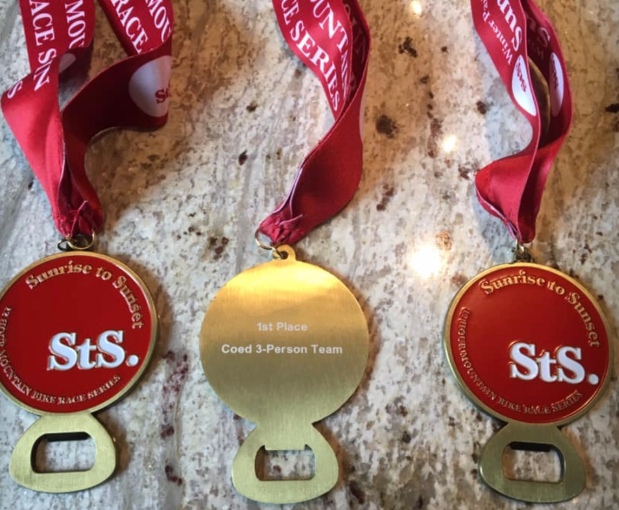 Roll Massif represents a collection of cycling events in Colorado.  They appear to have become the race/event director for several of the longer cycling events bike enthusiasts have come to know and love, as well as creating a couple of new events of their own.  One of those new events was the Sunrise to Sunset Winter Park Race on August 10, 2019.

Until this event, I had never done a twelve hour endurance event.  The idea of riding a bike for twelve hours was intimidating.  However, doing the race as a member of a team of up to five people would be something I could handle.  I invited a couple of colleagues to join me and Team Chocoholics was created!  We registered as a coed team of three.  I managed to get in one quasi pre-ride of the course a week before the race.  My training regimen consisted of sneaking in a handful of bike rides over the summer and, of course, consuming chocolate.

The night before race day, the team decided that I would take the first lap; I guess that was my reward for the crazy idea of racing.  I was reminded numerous times to have low expectations and that we were doing this for fun. It seems my teammates had training regimens similar to mine!   The race was held in the heart of Winter Park at Rendezvous Event Center.  We set up our tent and prepared to spend the day with our newest friends.

Each lap was about 9.5 miles long with ~1100 feet of elevation gain.  The first 3 miles were climbing, the next 2 miles were descending, the remaining 4 miles were rolling, but mostly flat and down.  The course was very well marked and volunteers marshaled at each road crossing, offering encouragement as you went by.  The course was fast & flowy singletrack sprinkled with some tree roots, puddles, and rocks.  It meandered from clearcut meadows through dense forrest.  We experienced sun, rain, lightening, and even some hail throughout the day.

Each member of team Chocoholics completed three laps, which was key to winning first place in the 3 person coed category.  Our total racing time was 11:34, just 45 minutes more than our second place competitor.  Interestingly enough, our lap times ranged from 1:08 to 1:29.  Considering that the three of us had never ridden together, our skill sets were very complementary to one another.

The race registration fee included a BBQ dinner at the Rendezvous Event Center, which was a fantastic way to end the day.  We were exhausted by the time the race was over and having a hot meal right at the race venue before awards was a bonus.  A band setup and played music during the last lap, which was also nice.  The Rendezvous Event Center has fully equipped bathrooms, which you may not appreciate until you experience a full portapottie in the afternoon of a hot summer day.

Overall, this was one of the better races I’ve participated in.  Congratulations to @RollMassif for putting on a top notch event on the first try!